Power to the People

Whatever happened to the SOPA and PIPA legislation of early this year? These acts were designed to protect Intellectual Property such as copyrighted material and trademarks on the Internet. Major providers such as Yahoo and Google would be required to remove access to “rogue websites operated and registered overseas.” The Senate bill, known by shorthand as PIPA, was officially S.968 – Preventing Real Online Threats to Economic Creativity and Theft of Intellectual Property Act of 2011. The so-called SOPA bill was the House version.

Most honest people applaud the efforts of the government to enforce protection of intellectual property rights. When an individual or company creates a trademark, or source code, or a work of art, or an invention, that person or organization has invested time and money and has every right to claim ownership. Our Constitution specifically empowers Congress to protect such rights in Article I Section 8: “To promote the Progress of Science and useful Arts, by securing for limited Times to Authors and Inventors the exclusive Right to their respective Writings and Discoveries.” Hence we have the U.S Trademark and Patent Office.

But the legislation known as SOPA and PIPA, well-intentioned as it was, created onerous conditions for Internet Service Providers, essentially making them the cops, and even the bad-guys, at their own expense and risk. Many, many people saw a lot of unintended consequences and unpleasant side-effects that could result from these new laws. 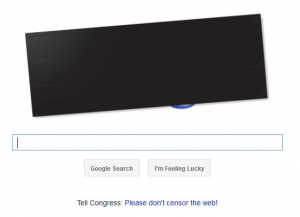 So the people spoke and the Congress listened. Such was the uproar on the grassroots level, from people of all political stripes, that thoughtful representatives and senators reconsidered the means they had chosen to protect intellectual property.

“Since the mark-up, we have increasingly heard from a large number of constituents and other stakeholders with vocal about possible unintended consequences of the proposed legislation, including breaches in cybersecurity, damaging the integrity of the Internet, costly and burdensome litigation, and dilution of First Amendment rights. Moreover, in light of potential cybersecurity implications, we believe hearing from the Administration and relevant agencies is imperative. As always, our current fiscal crisis demands we carefully consider legislation that would cost taxpayers up to $43 million according to the Congressional Budget Office. These are serious issues that must be considered in a deliberative and responsible manner. This underscores the need to resolve as many outstanding concerns as possible prior to proceeding to floor consideration.”

Do not underestimate the power of a single voice, especially when it is combined with millions of others.

Make sure your voice continues to be heard by not forgetting your passwords with our free Password Keeper – PassLoc. Just fill out the form at right.